Troodos Mountains are considered to be the kingdom of nature and adventure and can give us respite from a tiring, high temperatures and the coast’s hubbub. The highest peak of the Troodos mountain range is Olympus, which rises to 1952 meters above sea level.
If the visibility is good enough, from the top of Olympus we can admire even the landscape of Turkey. The Troodos Mountains separate northern and southern part of the island of Cyprus with a high range. This is a fantastic place to enjoy long walks on the gentle ridges and slopes covered with fragrant pine forests, where you can admire the landscape varied with waterfalls. There is lot of interesting routes here.
An unique geological structure of the Troodos mountains allows geologists to study ancient oceanic plate without plunging into the water. This area is considered one of the richest in the world when it comes to copper mining. The name of the Greek island “Kypros” suggests that this precious metal may be called – cuprum.


Bird enthusiasts will love watching rare and protected eagle, griffon vulture or colored hoopoe and nightingale, which singing made the Nobel Prize winner – George Sepheris spent a sleepless night in one of the resorts located in the mountains – Platres. With any luck, you can also come across the Cypriot mouflon, which is a type of wild sheep. Mouflon, which occurs only on the island, lives in the wild in the forests of western Troodos Mountains and is considered the symbol of the national carrier’s island of Cyprus. 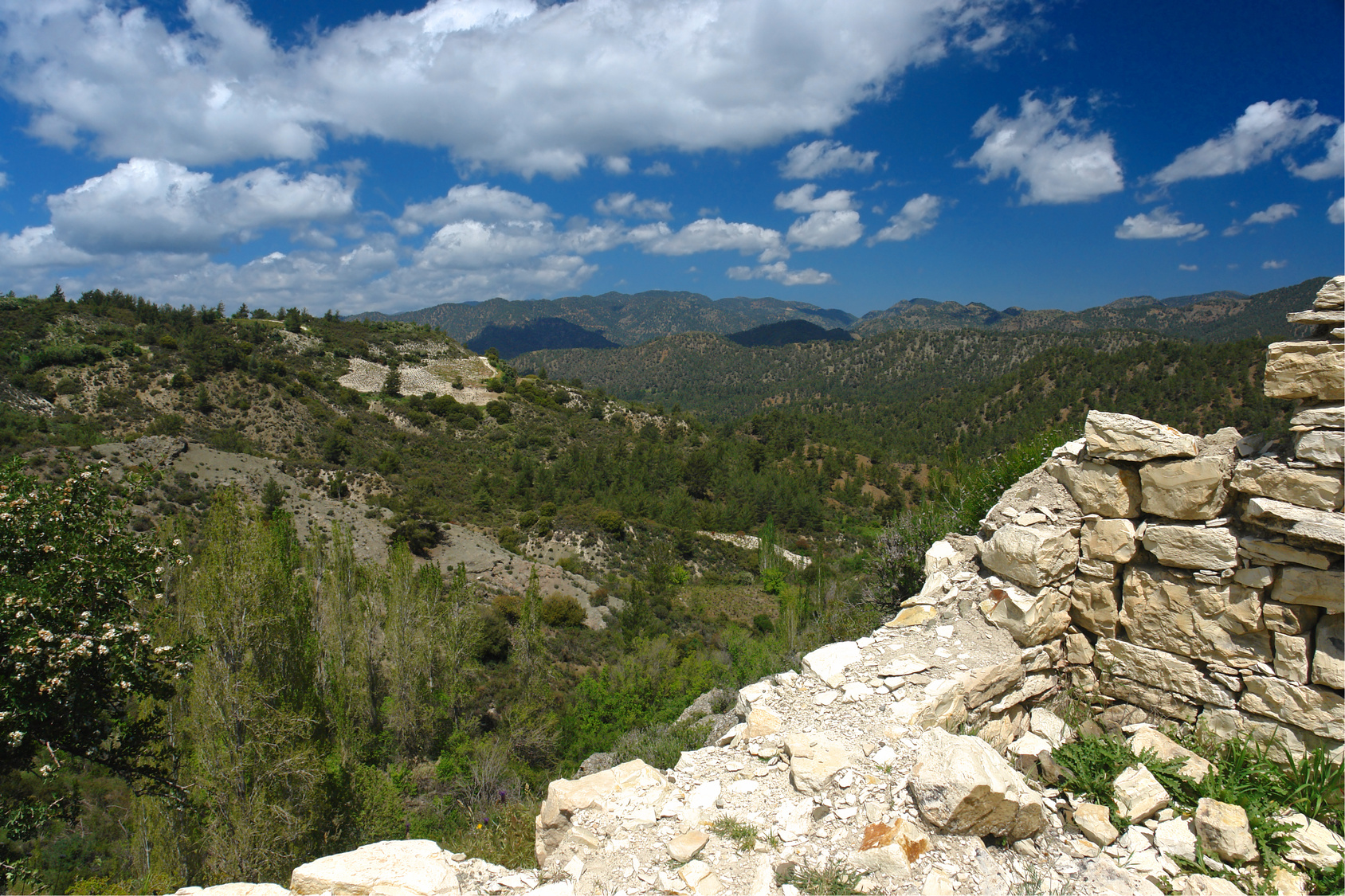 There is Mylomeri waterfall nearby popular mountain resort called Platres, which for most people is the starting point for mountain trek. We can reach this waterfall also going the trail of the same name, which length is about 1km. Krios Potamos or Cold River flows here from 10 meters cliff. Platres resort can be also the beginning of the route, which runs about 2 km the Caledonian Trail to another waterfall called the Caledonian Waterfall. It is the largest waterfall on the island and its height is 12 meters.
Undoubtedly the most interesting is the trail which leads along the most beautiful churches and monasteries, of which 10 have been inscribed on the UNESCO World Heritage List.
We can admire here, among other things:

The most famous Kykkos Monastery is also the richest and most showy monastery in Cyprus. The monastery, which is dedicated to Panagia, built on the north-west of the Troodos, in Marathasa region, on top of a mountain with a height of 1318 m above sea level. In its interior, we can admire one of three icons attributed St.Lucas Evangelist. This silver-plated icon is kept in the chapel of the turtle shell and mother-of-pearl and positioned opposite the iconostasis. When it comes to the structure of the Christian church, it was probably St. Paul who has begun it.

Churches, which are worth paying attention come mainly from the eleventh century. Mostly they have simple structures that hide inside valuable frescoes and icons.

The first church on the trail is Agios Nikolaos tis Stegis – translated as “Santa Claus with Roof” and is located near the village – Kakopetria. This temple dates back to the eleventh century and is completely decorated with wall paintings and one of them presents Christmas. Set in The frescoes, which are inside the church, come from centuries XI to XVII. This building is considered one of the most interesting Byzantine churches on the island.

Another interesting historical building is Agios ionannis Lampadistis monastery, also coming from the eleventh century. It was built in the village Kalopanagiotis, which abounds in numerous occurring sulfur sources. The whole complex of churchs include two churches and a chapel, where you can admire the beautiful frescoes created between the thirteenth to the fifteenth century.


Another, coming from the twelfth century Panagia tou Arakou is also a building with bright frescoes. The church is located in the village Lagoutera. The dome of the church is decorated with the fresco depicting Christ as the ruler of the world.

Next on the route is Panagia Phorviotissa church located in the village Nikitari, which was built in the twelfth century. Inside the church, visitors can view the original frescoes, of which the most important are the painting entitled “Christ walking on the water, surrounded by angels.”

Panagia tou Moutoulla coming from the twelfth century is an example of early Byzantine style building chapels and its characteristic features are the original frescoes which are inside and a wooden roof. This church is located in the village Moutoulass.

Another temple on the trail is a fifteenth century, Late-Byzantine Archangelos Michael church. The landmarked building is located in Pedhoulas – the village which is famous of cherry crop.

In contrast, the thirteenth century Timios Stavros church is situated in the village Pelendri, where we can admire the frescoes devoted to the Holy Cross.

Another noteworthy church, derived from the sixteenth century, is situated in the village Galata – Panagia Podhithou. The building functioned in the past as a part of the monastery complex. The charateristic features of this church are the Italian-Byzantine frescoes.