Cypriots, like all Mediterranean nations love good food and celebrate meals. So it is not surprising that their cuisine is colorful and various. Eating lunch or dinner is a great opportunity to meet and talk with loved ones but primarily an occasion for spending time togheter in a nice way. Undoubtedly Cyprus cuisine is different from Greek, but in Cypriot menu you can find a lot of dishes that taste is associated with Greece. Dishes from Cyprus have also Arabic roots. The cuisine was also inspired by Turkish, Oriental and English influences.

Cypriot coffee or “small black one” brewed in metal (copper or brass) pan, called briki (μπρίκι). Sweetening coffee occurs during brewing by sipping sugar to pot . This coffee is confusingly similar to Turkish coffee, but it should not surprise anyone if Turkish influences are quite visible in Cyprus. The only difference is that we drink it on the island of Aphrodite, or in any other setting. Cypriots are not enthusiasts of espresso or coffee with lots of milk, which changes the black, aromatic beverage into macchiato or latte. Coffee prepared in Cypriot way is usually served in a cup with a glass of water to soothe our thirst in hot days. Traditional Cypriot coffee blends fantastically with the traditional sweets in the form of colored jellies (Cypriot delights) and delicacies embedded in a thick grape juice. 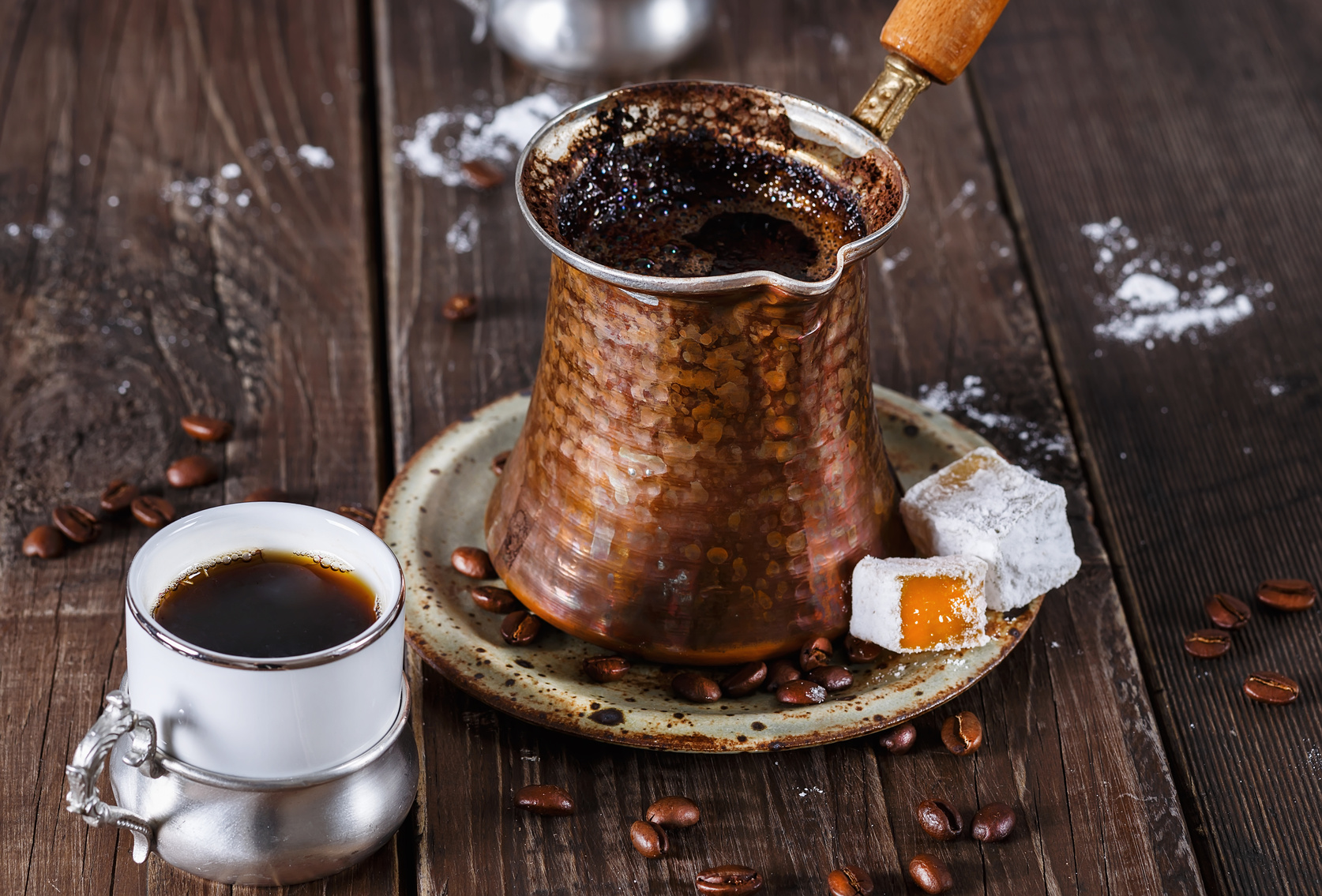 One of the components of Cypriot cuisine, which is the most famous in Cyprus, is a local halloumi cheese made from goat’s milk or also sheep’s milk. Normally it is served as a snack. Dishes in Cyprus are adequately seasoned, but they are not very spicy. Also, you can not say about them that they are a high-fat. 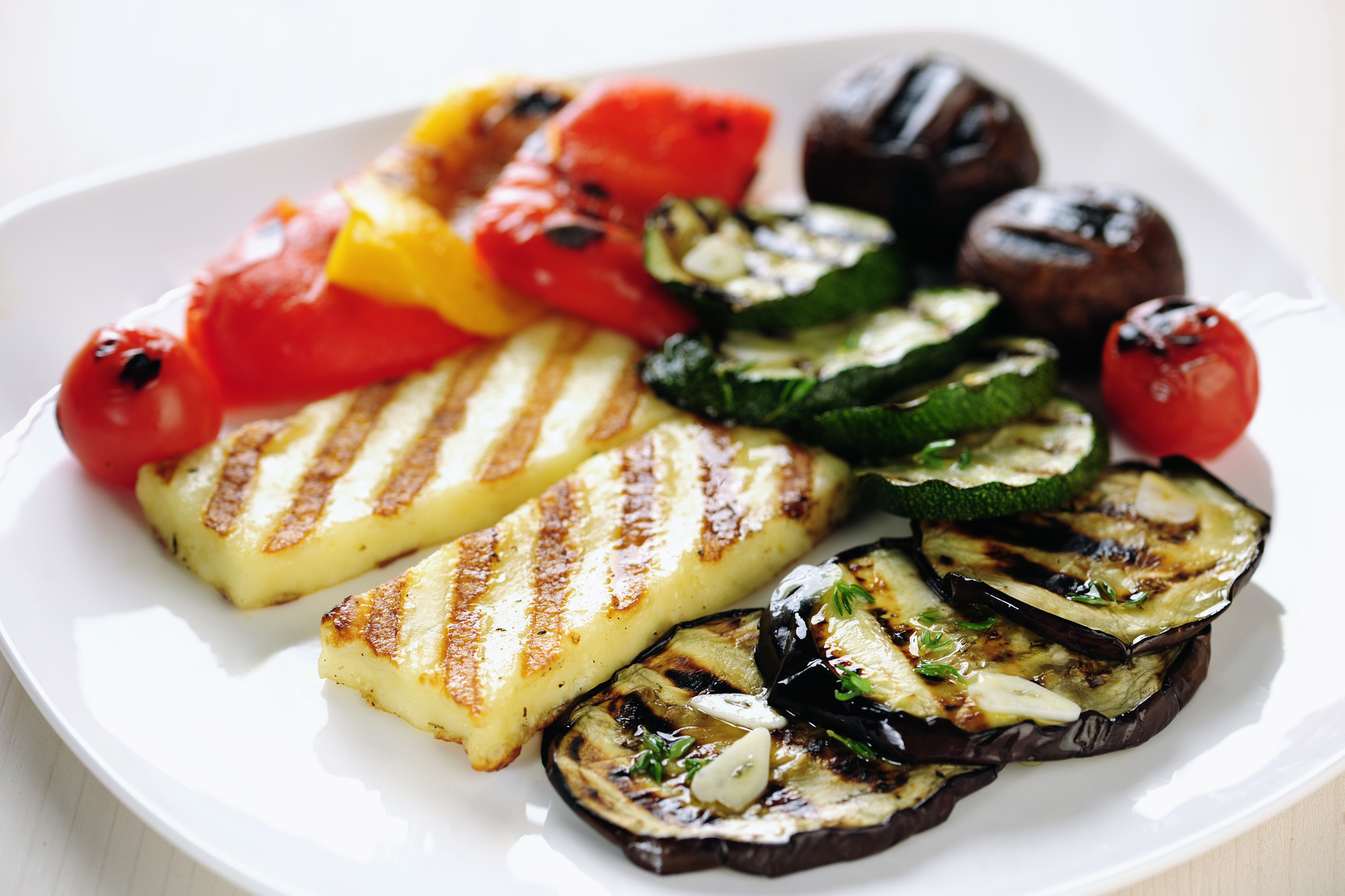 Examples of appetizers in Cyprus:

What may surprise some is that, despite the position of Cyprus in the sea, in the local cuisine you will not find many fishes or seafood, as the waters surrounding the island are considered to be quite poor in shoals and clearly overfished. Therefore, many species of fish is imported in the form of frozen food. So fish dishes of Cyprus include: deep fried small fish and squid rings. When people go on holiday to resort town, it is extremely difficult for them to find a real Cypriot restaurant because their menu is matched to the tourist and the dishes served there represent international cuisine. For example, a meal on the island of Aphrodite may consist of fried vegetables with wholemeal flour pilaw or baked beans. However, tourists may consider this kind of dish as an appetizer to the main course. 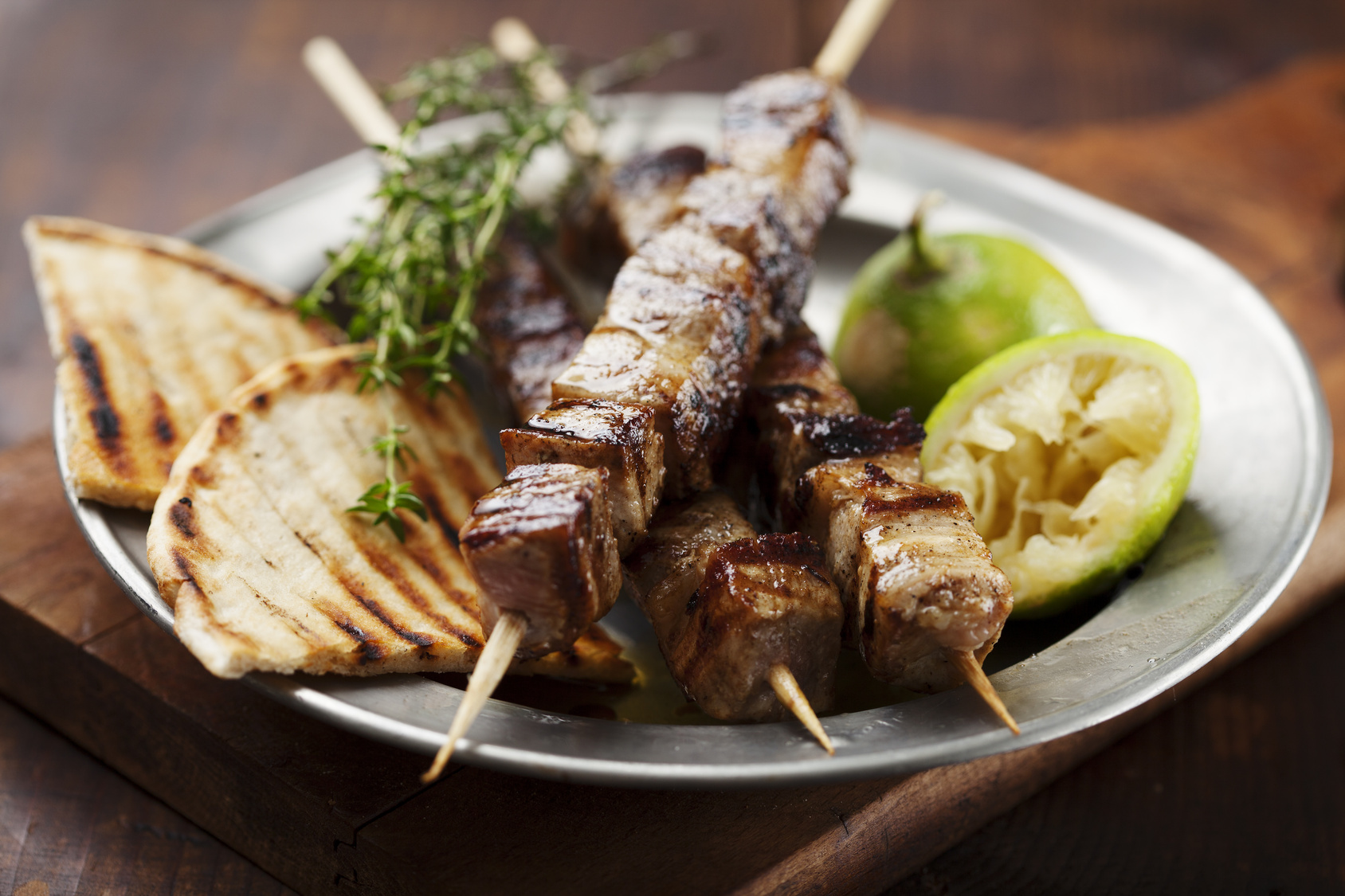 * Afelia – pork marinated in red wine, with the addition of coriander, cumin, pepper and cinnamon, then baked in a clay oven,
* Dolmades – rice with minced meat in grape leaves,
* Hiromeri – pickled goat meat,
* Kleftiko – the most famous Cypriot dish. Its major component is lamb. The meat is roasted in its own juice in a traditional oven called ofton. The most popular additions to it are: potatoes, carrots, onions, green beans and tomato. Kleftiko is obviously consumed hot.
* Souvla (σούβλα) is a popular Cypriot dish prepared from large pieces of meat, baked on a long skewer over charcoal. Neck of pork or lamb are traditionally used to souvla, and the whole piece is broilled on the Cypriot grill called foukou. The alternative version of souvla also is prepared from chicken meat.
* Avgolemono – is a soup cooked from eggs and lemon juice. This soup is considered very healthy and nutritious, and it is given on a cold and … hangover.


* Trahana: a soup prepared from milk and grain. The soup is also popular in Armenia, Bulgaria, Albania, Bosnia, Serbia, Iran and Iraq, as well as in Egypt. Traditionally, it was prepared from a fermented milk, yoghurt, cooked with grains of different cereals. It was stored as a moist paste or dried and crushed. Depending on the region you can enrich the soup with various additions like pickled vegetables (in Turkey). On the basis of trahana paste today nourishing soup cooked in all the above mentioned countries. The differences are mainly only ways of seasoning.
* Koupes – balls made from dough which includes coarsely ground wheat, stuffed with minced pork or beef with onions, parsley and spices,
* Paidakia – mutton chops,
* Ressi – a dish of shredded meat and wheat (Wedding dish)
* Moussakas, or simply musaka is a dish also popular in Greece. It is a casserole prepared with potatoes, eggplant, minced beef or lamb and cheese. The dish is seasoned with béchamel sauce.

Being in Cyprus you should also taste a thick stew of pork, beef or rabbit. A stew is seasoned with additives such as: tomatoes, onions, cumin and cinnamon.

Cypriots love local wine which drink in large quantities, and also beer (local brands are: Keo and Carlsberg). Very popular is also the local excellent brandy. Usually diluted with water, seasoned with lime juice and a drop of angostury (bitter vodka with 48% and a red-brown color), to make a brandy sour, a perfect aperitif. Worth of recommendation is also the local sherry, and the most valued brand is EMVA Cream. Cypriots delight also in the taste of Filfar orange liqueur that resembles Grand Marnier.

Cypriot wines are also worth mentioning. Their history dates back 2000 years, Homer praised them, the Egyptian pharaohs praised them too. Today, wine production is one of the main sources of the inhabitants of the island`s income. On the island of Cyprus, we can count about 40 wines.
The main wine producers are SOSAP, KEO, LOEL and ETKO. Their factories are located in Limassol and Paphos.
The most famous wine brands include:
ETKO, Agios Amrosios, Stern, Monte Royi, Tsiakkas, Fikardos, Commandaria,
The tastiest brands of wine are: Commandaria, Arsinoe, and Palomino, Bellapais, Afrodhite, White Lady, Othello, White Lady.
The largest importer of Cypriot wines is the United Kingdom.
Every year we can participate in Festival of Wine in Limassol.

Cypriot desserts are characterized by an intense sweetness and diversity. Baklava (baklavas) is considered to be a real delicacy, which is also present in the Balkans and Turkey.
In Cyprus we will find also other sweet treats. 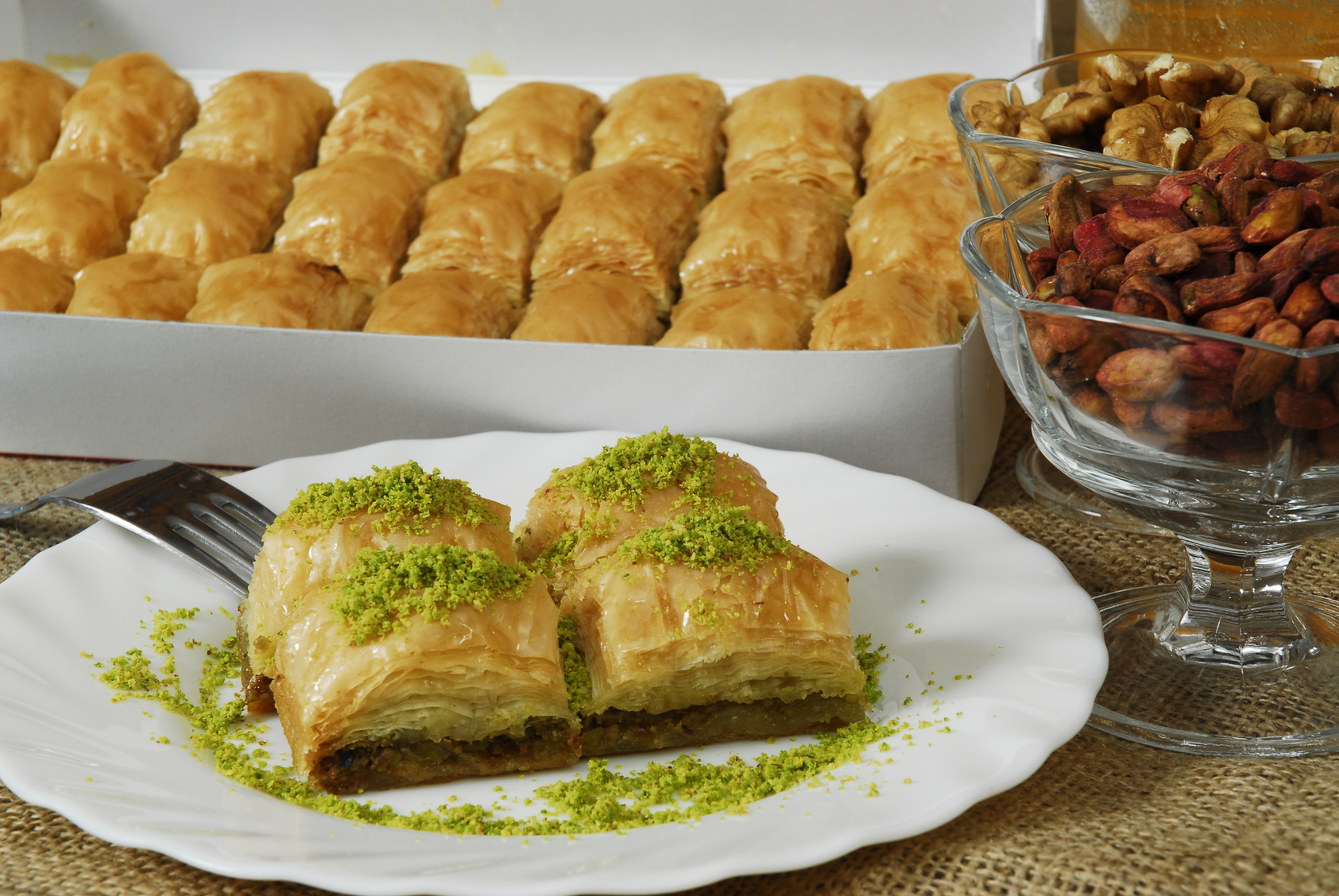 * Baklavas – puff pastry layered with honey and nuts,
* Bourekia – pastries stuffed with cream cheese mixed with honey,
* Flaounes – Easter cakes dipped with cheese and egg, sprinkled with raisins,
* Kolokotes – triangular ravioli stuffed with pumpkin, raisins and finely divided grains of wheat,
* Loukomi (Cyprus Delights) – a sweet fruit jelly sprinkled with powdered sugar, drizzled with nuts and raisins. Jelly is formed from sugar, starch and water with fruit juice. Paphos region is specialized in this delicacy.
* Kouppes – fried croquettes with sweet onion and ground dried fruits and nuts, seasoned with spices,
* Palouze – a jelly with grape juice sprinkled with nuts and raisins, served warm,
* Kiefterka – has the same composition as palouze, so that after cooling jelly is cut into small squares (2-4 cm).
* Soutzoukos (soutjouko) – look like long wax candles. These are almonds (nuts) dipped in grape molasses, rose water and strung together.
* Soutzoukos and kiefterka create the perfect flavor composition in combination with a glass of famous Cyprus alcohol – Zivania.
We have good news for gourments of Cypriot sweets – every year in the village of Arsos (Limassol District) is held a special festival dedicated to the Cypriot sweet goodies, the Festival of Palouzze.