Kyrenia is a delightful city and the quintessence of northern – Turkish part of Cyprus. The city gained its fame primarily due a variety of attractions such as: a great medieval castle and the Old Port which pulls in lots of tourists.
It is just the port that has become a popular place for walks. Persons wishing to enjoy regional dishes or Turkish coffee can call at charming cafes or restaurants. A walk through narrow streets of the oldest part of the city will satisfy even the most demanding tourists during holiday in Kyrenia.
Kyrenia interchangeably called Girne (in Turkish language) is the center of the region of the same name. Residents live from trade and crafts. There is also a few manufacturing food industry plants and it would be to difficult miss a number of service companies associated with tourism. There are also two universities in Kyrenia. 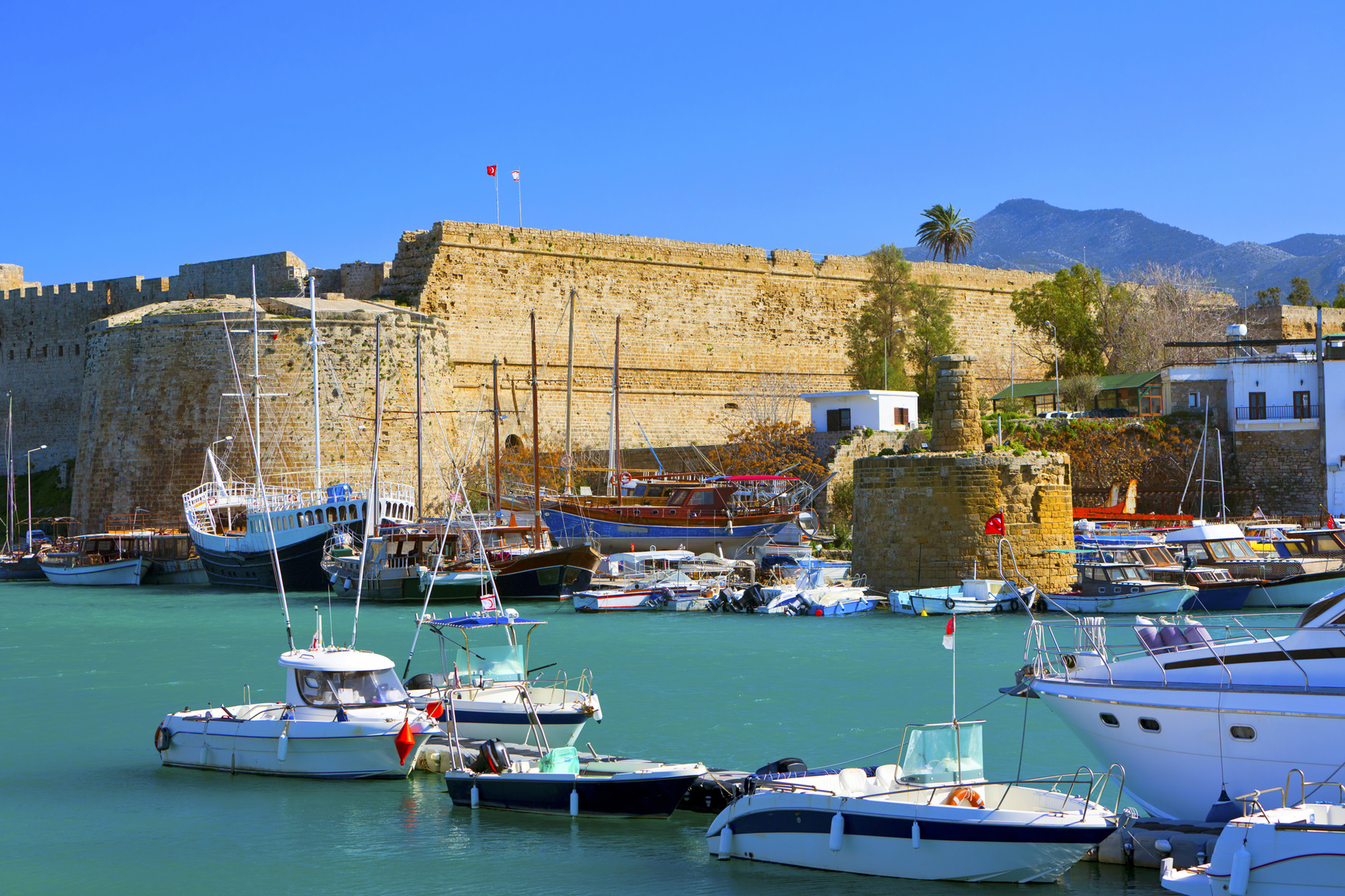 There are a few places that are worth visiting in Kyrenia.

The first was the already mentioned – the city’s port, which is marina for yachts and fishing boats. It is located between the old walls and the fort, with the Beshparmak mountains in the background, thus creating an amazing view. Semicircle waterfront is filled with cafes, bars, restaurants and a plenty of shops. Tourists luxariating in the beautiful views and tasting the traditional dishes or drinks can observe routine activities of fishermen or sailors who prepare yachts for discharge to the sea. In the evening, this climatically lit “horseshoe” will indulge us with an interesting offer of local delicacies. Starry sky stretches on the busy promenade and well-lit walls and bastions of the fortress make an impression that they are within our grasp. Both the fortress and port in the past had a significant impact on the development of the town of Girne. Trade with the Anatolian coast ports had a positive impact on Kyrenia and resulted in prosperity.


Because of the shallowness of the harbor, boats located on the anchor have only 3 meters of water under the keel. Larger yachts, from the 80s of last century, can use the new port basin, which is located more to the East. Allegedly, in the past, there was a Roman port in a small bay isolated with coral reef from the sea, situated on the eastern side of the castle. However, the current marina and fishing port started to be used in the Byzantine perion. 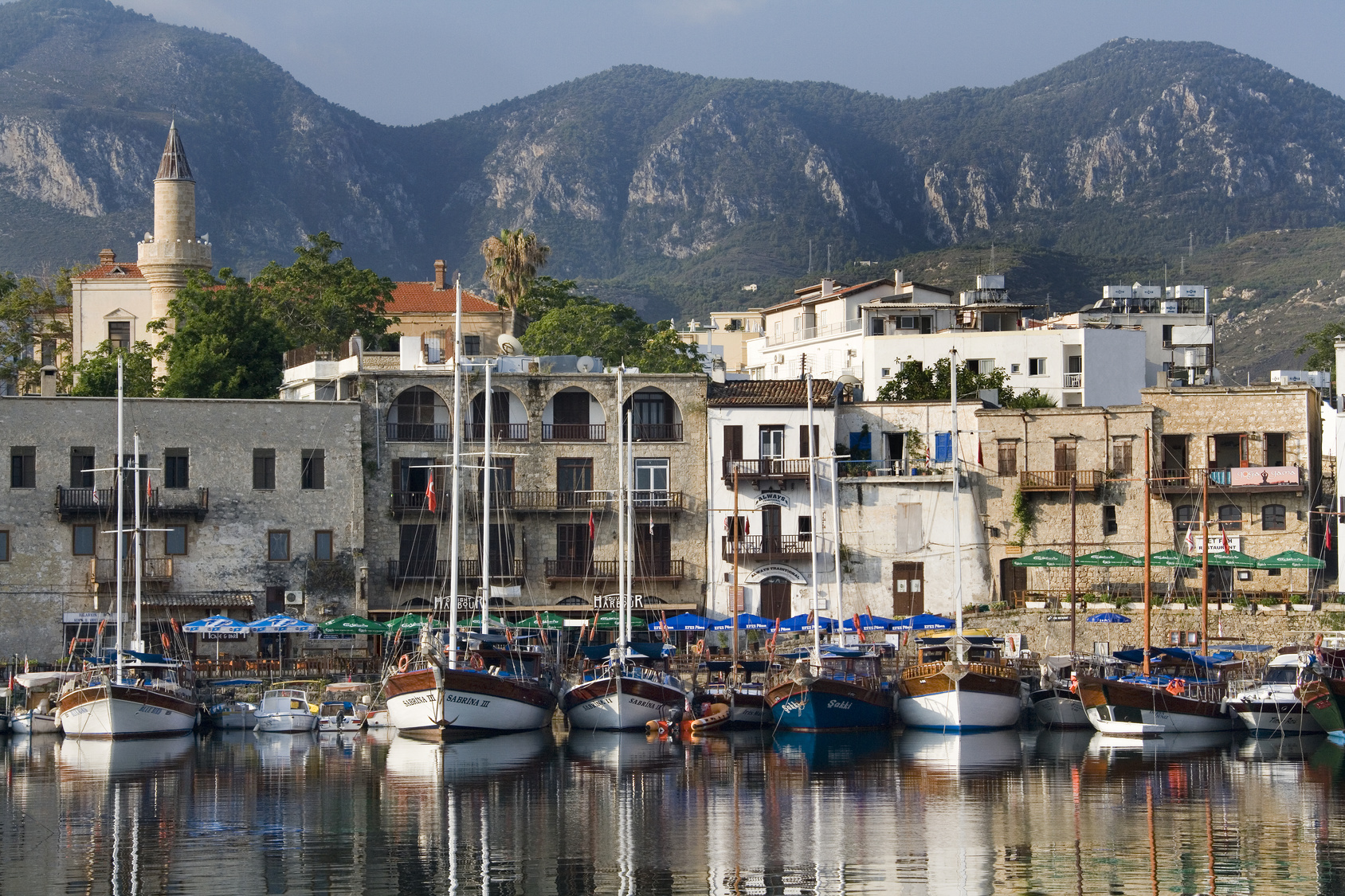 Undoubtedly, another attraction of Kyrenia is the Girne Castle.
The fort dates from the sixth or seventh century and is located in the oldest part of the city. As historical sources say – Richard the Lionheart was the person who conquered it in 1191r. In the fourteenth century, the fortress was destroyed due to the struggle of Genoa. After the acquisition by the Venetians, it was rebuilt and in this form since 1974 functions as a museum for visitors. The castle has a great variety of styles, which undoubtedly increases its cultural and historical value. Professional eye of enthusiast’s landmarked buildings will spot Roman, Byzantine and Venetian influences. The castle intrigues visitors with the exhibitions, such as: the Tomb-Finds Gallery or the Ancient Shipwreck Museum, which demonstrates Greek commercial castle, which was excavated from the sea depths. This castle sank back in the days of antiquity in the area of Kyrenia.

As it comes to other historical treasures – also should be seen in Kyrenia:

The mosque is named after the Ottoman military leader – Aga Kafer Pasha. This temple over the centuries has been destroyed many times and everytime newly rebuilt. At the time of prayer, in the maze of houses and streets echoing cry of the muezzin can be heard. A slender minaret, which emerges from a massive base, has a gallery in the upper part, supported with brackets. Muslims assembly hall has been placed on the foundation, in which currently the visitors of mosque practice ritual washing. Previously, water was ladled from a nearby fountain, which flew into a stone tank.

This temple is considered the biggest and the most beautiful mosque of Northern Cyprus. The impressive building, which was built high on a slope, is characterized by the great Ottoman mosques style from the sixteenth century. This temple dominates the entire coast of Kyrenia. 17 small domes and semidomes surround the massive main dome under the hall, where prayers are held. In this hall once 750 worshipers can be gathered. Numerous colored glass windows and a massive chandelier, flooding the room with a warm light. On the sides of the mosque two 38-millimeter pointed minarets rise high above the roofs. Each has a balcony serving prayer exhortations („serefe” in Turkish language). The cost of construction of this temple is estimated at one million US dollars and is the Turkish-Cypriot joint work.
Another temple, which is also worth to visit is St. Andrew church. This church is the only temple of the Anglican community and was built on a rocky ledge in front of the south – western bastion of the castle.